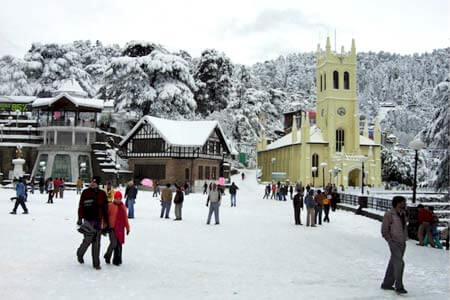 Nearest Airport: Chandigarh airport is 129km away and next is Delhi airport. However, there is an airport in Shimla also but it is only for small air trips and not functional throughout the year so it is advisable to choose Chandigarh airport.

Bus Service: Shimla is a popular tourist destination and is well connected by road from other states like Delhi, Haryana, Chandigarh and cities of Uttar Pradesh. Buses of HRTC run in all parts of Himachal Pradesh. Cab facility from Delhi and in Shimla can also be preferred.

Food: Mouth watering food of Shimla includes the Bihari Lal Sharma Stall at Takka Bench popular for fruit chat. It is near Jakhoo temple and running from 1948. Next is tea stall of Britishers times on Thandi Sadak, Chawda Maidan. It is there from 1931, Lord Mountbatten was so impressed by the tea and got that shade built into the permanent structure. Momos on the hilly areas and samosas of Lakkar bazaar are also very popular.

Best Time to Visit: Peak season to visit Shimla is from March to June. The snow is melting gives the fascinating view, many activities like trekking, gliding, skiing can be enjoyed.