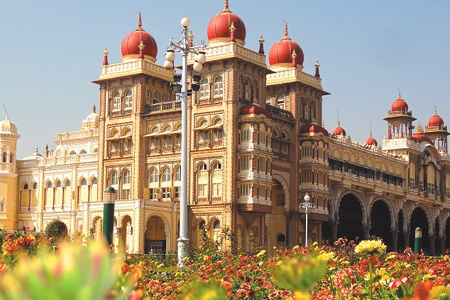 State: Karnataka (second most populous city after Bangalore in state).

Attractions: Mysore Palace is the residence of the royal family and a stunning example of the Indo-Saracenic style of architecture. It is the biggest palace of the country and built in 1912 for the emperor of Wodeyar Dynasty. Somnathpur is great picnic palace and a breathtaking example of stone carvings. It is founded by Somnath who was a commander of Hoysala army. Mysore Zoo is one of the best zoological gardens in India. Brindavan gardens modeled after Shalimar gardens of Kashmir, Chamundeshwari temple, Karanji which has the biggest 'walk-through aviary' in India, GRS fantasy park, Folklore Museum, Rail Museum and much more sites are Mysore for tourists.

Nearest Airport: Mysore airport is also known as Mandakalli airport and it is a domestic airport. Next is Bangalore airport which is international airport and is well connected by almost every other airports of India.

Nearest Railway Station : Mysore Junction railway station is located at the center of the city and is well connected by other cities.

Best Time to Visit: October to February is extremely pleasant climate to visit there. This season is also popular for couples.
PLAN MY TRIP