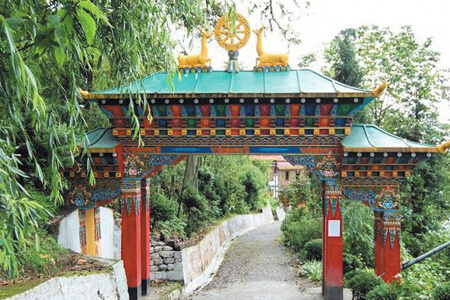 Attractions: Toy train running at snail’s pace in the Darjeeling Himalayan range is the most beautiful experience, Tiger Hill witnesses the first rays of sun, Betasia Loop where toy train takes completely 360 degrees turn, Japanese Peace Pagoda, Rock Garden or Barbotey Garden in which even the benches are made by cutting the rock, Nightingale Park, Sandhakpu Trek is the highest peak of West Bengal and very close to Nepal border, Padmaja Naidu Zoo is the only collection of Siberian tigers and some exotic animals like red pandas, Himalayan black bears and snow leopards. Darjeeling offers some of the best trekking stretches in the world.

Nearest Airport: Due to the rough terrain of the city Darjeeling doesn’t have its own airport. Nearest airport to Sikkim is Bagdogra located in Siliguri, West Bengal that is 96km away from the center of the city. From Bagdogra, there are some direct flights to cities like Kolkata, Guwahati and New Delhi.

Bus Service: Bus service is quite slow but economical. Regular buses from Siliguri, Kurseong and Kalimpong.

Nearest Railway Station: Gangtok doesn’t have its own railway station. Nearest railway station is in New Jalpaiguri near Siliguri. It is 148km away from Gangtok. It is well connected by the cities of Kolkata and New Delhi.

Food: Thukpa is type of noodles made in soup and vegetables in Nepali style, momos are very popular that it can be found easily in the streets at food stalls, Dalle is Darjeeling hilly pickles, Naga Cuisine and Nepali Thali, Churpii and Sael Roti are also very popular.

Best Time to Visit: Best time to visit Darjeeling is from October to March that is after monsoon when climate starts slightly chilling and one can enjoy the trekking and exploration of astonishing valleys and mountains.
PLAN MY TRIP