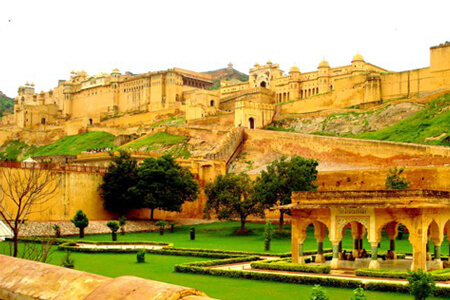 Attractions: Amber Fort popular for its magnificent architecture and enthralling elephant ride for the exploration of the fort. Fort was actually built by meenas and later ruled by the emperor Man Singh. Jalmahal attracts tourists from all over the world and looks too fascinating in the evening. It is four stories structure whose three stories are submerged in water and only one is visible. Albert Hall showcases the historical and cultural aspects of the city. Nahargarh and Jaigarh fort, Birla Mandir, “Palace of Winds” – Hawamahal are the popular tourist attractions of the city.

Nearest Airport: Jaipur has its own international airport and declared as world’s best airport in the category of 2 to 5 million passengers per year. Airport has regular flights from New Delhi and other popular destinations.

Bus Service: As Jaipur is capital and also metro city of Rajasthan. It is well connected by road to every other city. RSRTC controls the government buses and there are numerous of private agencies. Taxi and cab services are also best option to explore city.

Food: Cuisine of Rajasthan is perfectly showcases by the food of Jaipur. Traditional food items are Dal, Bati, Churma with Kadhi and Dal. Other popular dishes are Pavbhaji of stalls in courtyard of Birla Mandir, Sevpuri of Raja Park. Popular sweets are Ghevar, Mawa Kachori and Pyaj Kachori of Rawat Sweets near Sindhi camp is lip smacking.

Best Time to Visit: Every season is good to visit Jaipur but summers are very hot so avoid summer season.
PLAN MY TRIP